What Made My Week 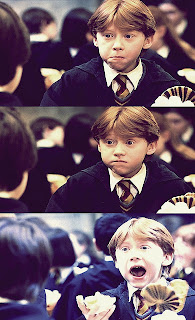 I'm sincerely in love with writing lists, and being quite detailed with everything, so this is a way to express that love of everything this week.

A club meeting.
Making a hilarious video about recycling that is to be shut in a tomb forever.
A tornado warning.
A bomb threat [this actually kind of sucked, but I got out of PreCalculus, and anything that gets me out of that class is fine with me].
Volunteering at the Ronald McDonald House [definitely could see volunteering a lot there in my future].
Entire several hours of just French speaking, and English subtitles.
Compliments from some VERY unlikely people.
Somebody being more outgoing than me and talking to me.
A few quite-cute guys [not that I talked to them or anything, just seeing them made my week].
A haunted house where I wasn't very scary [at least I didn't make anyone cry].
Finding three [or really four] Waldos in real-life.
BigCityDreams by NeverShoutNever. :]
Waking up at twelve in the afternoon.
Some freaking humongous cupcakes on the counter right now.
[Haven't tried one yet, but the anticipation building up inside of me is amazing.]
TWO story ideas [I'M WORKING ON 'EM, PEOPLE].
A Halloween party tonight.
Celebrating Halloween tomorrow.
[Really, having an excuse to wear my wolf hat for three days straight.]
Every blogger & follower in the world [even the ones I don't know... yet] :D

That was quite a long list, and I could add more, but I think I'll leave it at that. We had a Halloween contest at our school, and the winners were the different characters of Clue. Oh man, they were fantastic.

I'm kind of frightened- my best friend is bringing his girlfriend home today. Truthfully, I'd be more relieved if they didn't try to come and see me than if they did [because I'm quite an awkward person around people I don't know], but I'd also be quite upset if they didn't try, too [because he's my best friend and all and should at least try on those kinds of things]. Oh, and I'm not showered, so that would be something to do. I'm just a nervous person all-around today, but also happy.