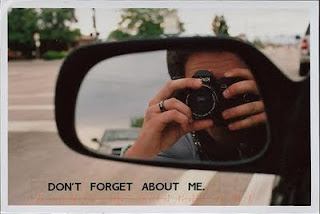 It seems like everybody else has been writing about missing somebody [or something] these last couple of days. Truthfully, it freaking stings.
It's the day before the last day of my friendship with my best friend. He'll leave, and then come back for a bit, but I can already tell by how his face lights up when he talks about his future that it won't be the same. And then he'll leave again, for much much longer.
We've spent so many days together I can't even begin to count. Every day before school, in the hallways, he was there. Every day, in the summers of the past, he was there. We walked through the wilderness, and went on adventures.
But now those summers have run out, and he's about to leave. I'm trying to hold on to every memory now, but the time is slipping through my fingers, falling and settling on the bottom side of the hourglass.
He is one of my very few close friends, and probably one of the most important people in my life. He's been the only one I can see in the summer- the only one I've ever been able to tell all my secrets to, and trust him to keep [most of] them.
The thing I'm most afraid of is that it'll hurt more later than it already is now, even though he's not even gone. I'm afraid it'll hurt more than all the crushes I've had in my life combined, when I don't get a call or a text when he starts his "more mature" college life without me. It hurt when he said that he didn't want to keep in track with all of his old friends, afraid he'd feel "obligated to come back" and actually care about them.
I refuse to let go of him, though, until he forces me out his life, or forgets about me.
Yet, I'm hoping his leaving will help me. Even if he does forget me, my other friends, although they aren't as close, hopefully can help fill this hole in my heart. I can hopefully learn to live for myself for once, and not rely on others.
So, all I can say is farewell, and not to forget me.
[I certainly won't forget about him...]
dreamed up by Mack at 2:33 PM

there' nothing harder than letting go of a friend that's moving on to different things that don't include you :[

i came across your blog at random, and i have to say that you write beautifully and seem like such a delightful person. this post made me cry. kid you not, full on tears. because i understand how you feel. oh, how i do. it's so very similar to what i'm so very scared of. (that my best friend, (who is also a guy) will forget about me.) and to be forgotten by your very best friend, that person that means more than you can explain, that's so hard. i hope he doesn't forget about you. i hope things go better than you expect. i really do.

Hippie Grandma [by the way I love your screen-name(: ], thank you so much for the wonderful compliments. :] He really does mean more than I can explain- I think that's why I've been writing about him so much, just trying to get my feelings straightened out.

That's why it stinks that he's older than me- he has had so many other people in his life he could have been "best friends" with, but I knew [for me] from the start it would always come down to being him.

I've also learned from these last couple of days that you CAN work to save a friendship, even when you're afraid it's falling apart. I truly don't think he'll forget about me now, unless for some reason later on he forces me out of his life. Things happen, and life goes on [hopefully].

Just make yourself a part of his life, even if it's just in the corner of his calendar, or a contact on his cell phone- your best friend will never forget about you, either.

I hope the best for your friendship too (: