I Had A Dream Last Night. 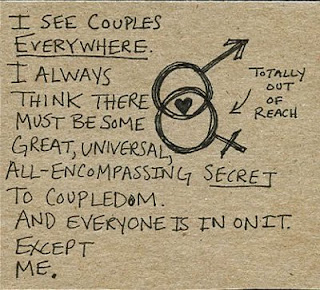 No, this actually wasn't meant to refer to Martin Luther King Jr, even though I am reading an interesting book about him and his speeches, and this dream did give me hope. But not that kind of hope. This is more of a hope for the future, of finding love.

This dream was that kind of dream that you get from all your experiences that day combining, kind of like sending your entire day's memories into a kaleidoscope.

In my dream, I first started out exiting a bathroom stall. It doesn't suprise me, because for some reason I spent more time than usual in my school's bathroom yesterday. I began to wash my hands. There were some other people in this normal women's restroom, except for some reason there was a guy standing two feet away from the only open sink. I walked over, and began to wash my hands. He turned around to face me, and, for some reason, placed a wet paper towel in my hand. Even though it was a dream, I could feel the dampness on it, and a force I saw as his hand against mine. He kept his hand there, and didn't move at all. It felt like all sorts of drugs were shot up through my veins, and it bubbled as it crept up towards my heart and my brain. The only thing he said was "Hold this," with an accent I couldn't place- I'd call it "sweet-ish." ;)

I don't remember much else about him, besides the fact that he was about a foot taller than me. I'd call him a country boy, based on his thick black boots and plain shirt and pants [not that I like country boys or anything, it's just that they always seem like the sweetest guys; that's a majority of our county, anyways ]. All I really saw was his eyes. I don't even remember the color of them, just that they seemed to hold a sweet, caring puppy-dog kind of feeling behind them.

This might sound lame, but not to me, mostly because I've had a total of one [crappy] boyfriend my entire life. I think back on it right now, and think "Is that how [love] is supposed to feel? Just that kind of infactuation you get at first sight, like Romeo & Juliet, or Marius & Cosette?"
And the dream just kept on getting deeper and deeper. Before I knew it, we were walking and talking through a hall of stores, clothes racks, and shopping carts. I don't remember what was said, just that it felt all right.
Before I knew it, though, I was with Dirk, my best friend. We were holding hands for whatever reason, as I led him through the crowds to wherever. I looked down, and noticed a spot on my shirt. I ripped my shirt off, revealing a bra. Dirk and a sales lady [who was going to give me a shirt] were there, but for whatever reason I wasn't embarrassed in the least. I left [with a shirt- this is a dream, after all], and we continued hand-in-hand through the center. I felt bad because I was afraid that the other guy would see us, but then I decided I didn't care enough to change it. I saw the guy again. He seemed sad, but right after that I woke up.
Nothing else came, nor did it come back.
It gave me hope, and I woke up with a smile on my face for the first time in awhile, ready to face the day. :)
dreamed up by Mack at 4:59 PM