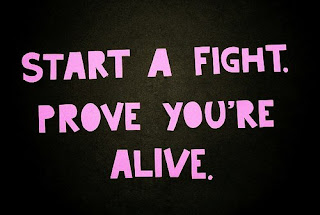 "I burst into tears but whether that was partly because I was bleeding like a harpooned whale with cramps that could kill a rhino, I'll never know.." [Video Store Girl- Chrisi] (Inkpop)


Umm, maybe it's just because I'm on my period [yay! not. -__-], but I'm extremely angry, and desire to punch things. Or people, specifically.. in the face.
She lied, I'm pretty sure. She just wanted to play a cruel game of Matchmaker, and see how it'd go in the perfect little world of hers. And I lost.

But, yes, I'm extremely outraged at that lie, and something else, on here- a misinterpretation. I know I shouldn't be angry at them, but really at myself, but that's hard to explain to myself in my stubborn-ness. I have more to write, but now's not the time to say it. Talking about it, and continuing my last post, is futile, because arranging ALL of what I want to say is so hard in my emotional state.

Therefore, I'm giving it all up and taking a little break for a while [maybe tomorrow, maybe not- depends on if it's better than today], or at least until I get my head screwed back on.

I apologize to a majority of you, being innocent and adorable as you are. I could not have better followers, truly. :] Just don't bash on people until you give them a chance to say something back. And, trust me, do expect something back.

IfitisfoodforthoughtIamSTARVING,
Macky :/
dreamed up by Mack at 10:21 PM

*hands over a plate of spaghetti*

There aren't any mistakes in life..just lessons :)
I hope things get sorted out soon.
<3

Um, did I say something wrong?
Did I give the impression I was bashing someone?
I'm sorry she lied.

My best friend and I call PMSing
being a "Potential Murder Suspect" and I find it so apropos.

And haha that is funny. :D