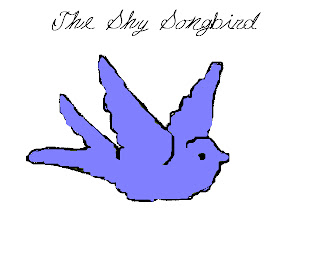 Once upon a time, there was a lilac-colored bird that couldn't fly. She could walk, or ride a bicycle, but never fly. It was the way she was born, and that was that.

For this reason, she had very few friends, besides her folks. The fish whom she visited when he didn't have to hide from the enforcers, and the balloon she had found at a parade long ago, named Murray, were the only others that truly understood the young, shy, misunderstood bird.

One day, she went out for a serene bicycle ride, and planned on having a splendid little picnic with the fish and Murray. She only brought a jar of jam, but it was that same jam from the blackberry plant she had grown in the backyard that had caused the fish to surface and their friendship to kindle.

Going out onto the path, she ran into no trouble or creatures- only delights. Acres of wildflowers scattered through the path, and from the wooden bridge she could see her own reflection in the water.

Upon crossing the bridge, she sat along the water's edge, waiting for the fish to come. Murray became quickly impatient, having other things to do with his time, so he floated away. But she still waited. After hours, it became dark, and she was still waiting. Nothing irregular stirred in the water, except for the momentary fish passing through.

So upset with her friend's absence, she began to brush herself off from the dirt on her feet after hours of sitting on the cold rocky ground. Out of nowhere, a gust of wind picked her up off of her feet and flung her over the water. Afraid, she spread out her wings, and, for the first time, began to fly. She soon met some new friends, and flew where they did. The fish had become a speck in her mind, as sadness floats away on the wings of time. She was now happy.

[I don't really know why I wrote that, so don't ask me where it came from. It was all just supposed to be lovely and sweet, even though it's kind of sucky. But it's meant to be sweet, kind of like a bedtime story, at least to me. I also used to have "bird-hair" as a kid, so that's where the bird comes from [and they can fly, so that kinda makes more sense instead of, say, a deer flying, although I love fawns, too]. Don't judge me [harshly]- I'm stressed, and kind of needed this...]

asdfrtgyhgfdsdfghjLISTENhgfrtyuyrionsoidnatuin.
dreamed up by Mack at 8:31 PM

Wow, this was so sweet..I love it.
I wish that I could write like you :3

I love you so much for writing this :)


This would be one of the stories that I'd want to tell my children, even if it is a little sad at the end. I feel like it just explains that things get better, things change, and life moves on in the end.