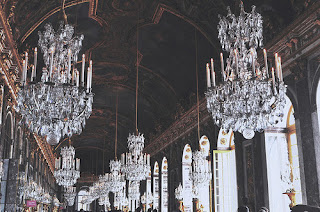 We just finished watching Marie Antoinette in Francais class today. Besides all of the nudity and mature topics that I feel are neither necessary nor proper to discuss, the entire setting was a dream. My dreams, in part- the time was in the height of architecture (I am deeply considering studying architecture- it's what I get for spending hours reading cottage design magazines); they had the most extravagant dresses and hair (you wouldn't believe how desperately I want her "boat" wig, even though it's shown for about five seconds at most); they played a game I played at the "speech team" party; and they even put on my future outdoor tent party! My dreams were all acted out right before my eyes- I just absorbed all of those moments and aesthetic scenes in their full excellency, which I still continue to drool over hours later. I floated through the halls afterwards, in bliss of  the fact that I was going to be seeing that very place they were at {versailles} in less than three months (76 days, in fact!). oh mon dieu. :3

The weirdest part of the movie was that it had half of the expected songs (Vivaldi and so on), and the other half was, well, modern music. Rap music, and rock and roll. It was bizarre, to see two generations separated by periods of so long of time come together and be used as a congruence of the two cultures, in a movie that seemed so insistent on preserving that lost time that is quickly fading away out of being.

Oh, by the way, it stars Kirsten Dunst- I'm pretty sure she's the only actress that can be a beheaded promiscous princess, Spiderman's romantic interest, and have a realistic dream transporting her to the Holocaust, all performed with easy excellence and elegance.

Foragoodtuneclickhere,
Mack. :)
dreamed up by Mack at 5:17 PM

The Strokes are pretty good. I like them, maybe not with the full out love I have for other bands, but I definitely like them.

I am always looking at hotels, or real estate, or home magazines to find something truly exceptional.

Maybe this longing to have a place all your own that is perfectly unique comes from living in a neighborhood with 5 basic floor plans.

That is so exciting that you're going to France!!

I get the best vibes from victorian-era architecture, with towering ceilings detailed down to the last angel's lock of hair and marvelous chandeliers.

There's an entire section of the Metropolitan Museum of Art dedicated to architecture like that. Hands down my favorite section in the whole friggin' place.

I don't see where the strokes are mentioned in this post, but I read Jillian's comment and I LOVE THE STROKES!!!

When are you going to France, then?

I think that's really cool that you want to study architecture. It seems like all of the architects I know are very happy and cool people. I think it's the most creative job you can get without having it likely that you'll become a depressed alcoholic.

Christopher:
If you click on the 'Foragoodtuneclickhere' right before Mack signed her name, guess what?

Jillian: My neighborhood is exactly the same as yours. It's exhausting to look at it when all of the houses are one of two colors.

Kay: That's so cool! I LOVE things like that- sounds like my kind of place. :D I went to a Titanic museum once, and they had "replica" rooms of the first-class passengers- it was very fantastic.

Christopher: I'm sorry about the link- I was hoping it would come up darker than it did. :/ I am going in France over spring break this year [even though it'll still be freezing], which is like 67 days from today, 1/16. And I never really thought about creative jobs that way, but it is very true haha, thank you. :)