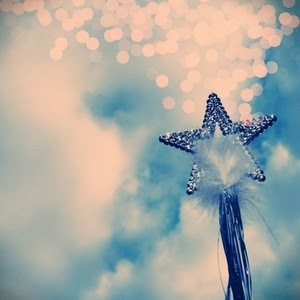 When I was little, I used to believe in magic. It was undoubtably real, even if I couldn't reach out and hold it- like true love, or the monsters that crept in the deepest crevices of my room at night.
As most of us grew older [unless you got a letter to Hogwarts, or seen magic that you can't buy in a kit for ten bucks at WalMart], that belief flickered out like a light as we continued our journey through life with more darkness [or "less brightness"- whatever you prefer].
Yet, thanks to my inner twelve year-old, I still look out for magic. You can tell when something's truly magical- something surfs through your entire body, making you tingle all over.
I myself have felt magic- I know it was.
Two years ago, I was singing a song: Jessie's Girl. It's classic. Check it out. Anyways, I was singing it one morning while I was drying my hair. My problem was that I was singing it wrong. The real lyrics are 'I wish that I had Jesse's girl'; I was singing 'I wish that I was Jesse's girl'. As soon as I had sung that line, I felt a ping. A ping that ran through my body like no other.
Is that weird to say? I connect sounds to how they feel to me. Like they vibrate through my body. It's weird. Sorry for saying anything that might make you think I'm even quirkier than what I am.
Anyways, I felt like I had done something wrong automatically. I thought to myself: no no no no no. See, there's this kid named Jesse that was in my sixth period class. Nothing wrong with him- he was a good kid and all- I just didn't like him like that. Literally like the next week, he asked me to our school's winter formal.
How does that happen, in a million, bazillion years?
Right you are: magic.
There's another "magical" experience I had, but I can't think of it now. That's kind of my excuse for everything- I want it to be magical. That's why I haven't had a first kiss- waiting for it to be magical. Waiting for that hopeful 'ping'.
So, it goes to show that magic, and love, and all those untouchable, real things.
This song sounds magical. And either anything with a piano & a teenage boy, or a guitar and a young girl/boy.
dreamed up by Mack at 6:36 PM

I *know* magic's real... even though it might not come in the form of santa claus. But it's always nice to know that magical stuff can happen to anyone [:

I know how you feel about that magic first kiss...

When I was little I wanted so desperately to go to Hogwarts and be a witch! I used to fantasize I was a Muggleborn!

But I know exactly how you feel. :( xxxxx Love your blog!