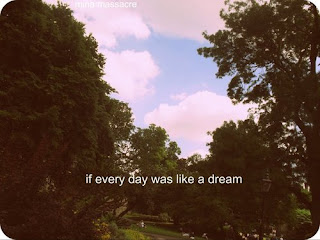 Wow. I just noticed that one of my first dreams was actually inspired by Dumb & Dumber. It's when Jim Carey is dreaming about Mary Swanson, the girl that they are driving thousands of miles to go see. He goes through these "romantic" montages about the two together [only one is "sexual" ya pervs], but I'm only referring to the one where they are socializing with a bunch of other people in a cabin.

The earliest dream I can remember is about being with a large group of people, all in a cabin. I was just a young kid at the time, but I always felt older. I still do, feel older, in the area of some things. Everyone was wearing those ugly Christmas sweaters, and sitting around on couches in the main room, laughing & talking, like in Dumb & Dumber [except, you know, not "dumb-ly"]. The only difference I can think of was that there was also a guy with a guitar, and they didn't look like they were of "this time." The women [although I don't remember too many] had big hair, and the men had big goatees, & kind of looked like that artist guy who used to do paintings like it was a coloring book [Bob Ross yeah!].

I really dislike that all of my dreams are influenced lately by things that happened that day, usually [although it definitely provides a new twist on the events].

All except last night, I mean. I had a dream about my French penpal [I've only seen pictures of him], and ohmygoodness, he was so cute. Especially in this "real life" situation, because he was so cute. It's sad, that only in my dreams I can be "flirty" [God, how I dislike that word, but it's true].

I've been on a John Green [fantastic writer] spree lately, & Eleanor Roscuro, writer over at Musings of an Undiscovered Genius [which I recommend whole-heartedly], posted a quote by him. From there, she led me to find that he actually has a tumblr, so I can now look at his postings and quote him ALL THE TIME. Check it out, at effyeahnerdfighters.com! Don't forget to be awesome- that's their saying. (:

Urgh, I have so much more to blog about, but so little time. I hope I'll find some more time tomorrow, because I've really missed coming up with good things to type about.

I totally get what you mean about being flirty in dreams. I've had a much more active dating history in my sleep than I've had consciously haha

The earliest dream of mine that I can remember is my cousin drinking milk with pizza in it. And it made his pants turn funky colors.